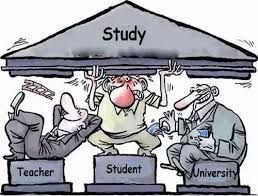 Academicians and scholars have criticized the existing education system in India as it presents an obsolete but functional entity that has been little evolved in the last so many decades. There are many flaws in Indian education system and they are quite visible even by having a cursory look.

Education Goals
To begin with, the contemporary education system in India stresses on the achievement of less significant goals. Most of the youth that receive education consider it as a qualification for employment. They learn and study only with this aim to obtain the desired certificate or degree that would be helpful in getting a job. In recent years there has been a marked shift in the interests of the students towards such academic qualification as would help the employment.

Superficial Understanding
The curriculum, assessments and practices more or less encourage superficial understanding and not the complete understanding of the subject matter in hand. Children are falling prey to such practices as rote memorization. In certain subjects the contents are so extensive and the time devoted to them is so less that the student has to force himself to memorize it.

Conflicts Regarding Reserved Quota
Student reservations in colleges and universities have been responsible for creating unrest among the students and carrying of protest demonstrations on many occasions in the past. The quota decreases the number of seats for the open merit, to which students have been resenting ever since they came into being. The logic behind the reservation is the encouragement of under privileged classes and their representation. However, the same has been accused of favoring political highlights. This is one of the major flaws in Indian education system.

Reformation
There have been no strong reformist movements to set the education system of India right. Although many scholars and experts in the field have expressed their views, but not much has been done at the grassroots to overhaul the education system.

Government Support
Unfortunately India is one among the developed and developing countries that spend a small percentage GDP on education. The policies and plans ask for 6 per cent of GDP and all it receives is less than 4 percent.

Apart from them there are many other flaws in Indian education systems that wound the education in India.